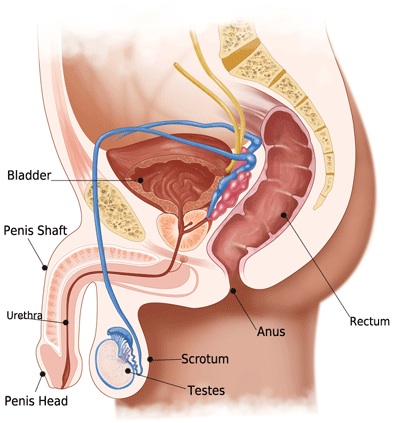 Many people don't understand the male anatomy. Knowing how things work and where to find the most sensitive areas to stimulate is a great way to please yourself or your partner. Understanding the basics also helps to create more intimacy between partners.

The scrotum is the sac that protects the testicles and controls the temperature of the testes. The scrotum can be sensitive and stimulating to touch.

The perineum is the sensitive skin between the base of the scrotum and the anus. Many men enjoy this area being stroked or having firm pressure applied.

The prostate has three main functions, with the official function being the creation of nutrient-rich fluid for sperm health and protection as the sperm moves through the penis and inside the vagina. The prostate gland also presses on the urethra in such a way that urine does not mix with sperm.

The third function is pleasure. Stimulating the prostate gland can be very enjoyable for many men, and stimulating it during arousal can increase the intensity of the male orgasm.

Playing with the outer area around the anus, or putting something just inside the opening can add a pleasurable sensation to any sexual encounter through the pudendal nerve, while moving deeper inside you will be accessing pleasure through the pelvic nerve.

Other important areas of the male anatomy:

The coronal ridge is the ridge of flesh that circles the penis and connects the head of the penis to the shaft.

The Corpa Cavernosa is the spongy tissue that runs along the sides of the shaft of the penis. When a man becomes aroused these fill with blood, resulting in an erection.

The skin that covers the head/glans of the penis. The foreskin contains nerve endings and is the part that is removed during circumcision.

The testes are the reproductive organs in men, producing sperm and semen.

Located at in the tip of the penis, the urethra is the entrance to the bladder, and the passage where urine and semen passes out of the body.